OBJECTIVES
The aim of the project is to investigate climatic and environmental changes as a causative factor for the collapse of the Kushite Kingdom of Meroe in ancient Nubia, Sudan. The specific objectives of the project are to investigate the human–environment relationship in ancient Nubia during the Meroitic (c. 300 BC – AD 350) and Post-Meroitic (AD 350 – c. 600) periods, and the impact of environmental changes on the pattern of human habitation and migration, subsistence and physical health. These objectives can be assessed through the study of human remains from mortuary deposits. 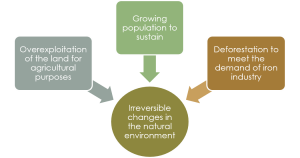 We hypothesise that the overexploitation of the land for agricultural purposes to sustain a growing population and to produce a surplus for non-productive social groups, and deforestation to meet the demand of iron industry, caused irreversible changes in the natural environment. This would have made human habitation in the area surrounding the ancient city of Meroe unsustainable. We predict that the combination of climatic and environmental changes will have resulted in changes in diet and health of the indigenous population, as well as increased movements of peoples within and between the Meroitic kingdom and adjacent regions during the late Meroitic (c. 90 BC – AD 350) and Post-Meroitic (AD 350 – c. 600) periods.

METHODOLOGY
The project hypotheses can be investigated through the application of bioarchaeological analysis, including (a) dietary and environmental stable and radiogenic isotopes to obtain information on changes in subsistence and movement of people during the periods of time and in the area under investigation; and (b) the identification of selected health indicators. Previous studies of the health of the populations of ancient Egypt and Nubia have demonstrated spatial and temporal variations in the prevalence of disease indicators, and in some instances researchers have proposed direct or indirect links between disease frequency and palaeoenvironmental conditions.
This project seeks to compile a dataset of high-resolution information on diet, movement and relocation of people, and health status information for the Meroitic and Post-Meroitic periods across the Sudanese Nubia. Primary data will be obtained from skeletal material from completed and currently ongoing archaeological excavations in the regions of Bayuda and Butana in Sudan, including curated skeletal series from Sudanese Nubia held in museums in Europe and the USA.

This project aims to promote and enhance appreciation of the importance of curating human remains as a valuable resource in studies pertaining to the interaction of people and their environment in the past.